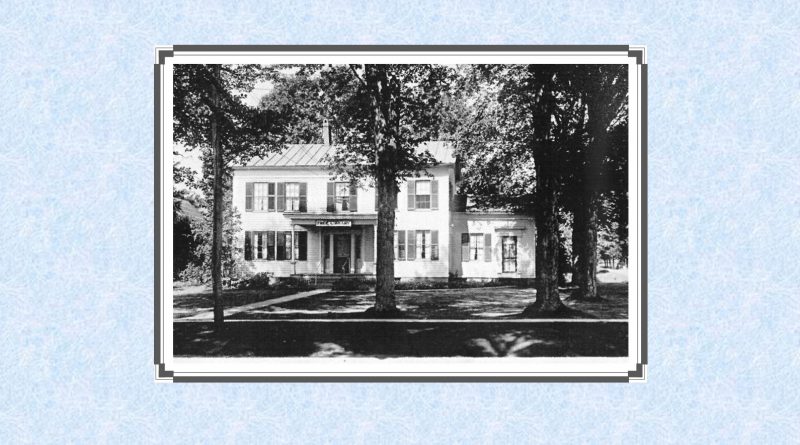 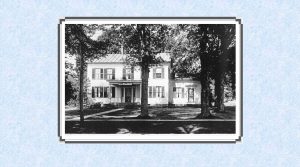 On October 18, 1920, a meeting of the Berkshire Free Library Association was held for the purpose of filing, with the University of the State of New York, a Certificate of Establishment of a New Library.

It is recorded that “over fifty” of the “more than 130” members of the association from the Town of Berkshire and vicinity were present.

A sum of $2 per member was assessed for the maintenance of the library. 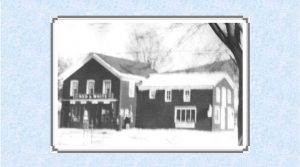 On December 1, 1920, Miriam Patch, President, filed the Application for the Library’s  Provisional Charter.

The library was for the free use of residents of the “town of Berkshire and some territory in the town of Richford” containing 900 inhabitants.

The application certified that the library had 150 bound books, in good condition, valued at $125; furnishing worth $40;  cash on hand of $160; and valid subscriptions receivable of $86.  It was to be kept in one room over the S. S. Dewitt General Store on Main St., with an annual rent of $36, and to be open 2 hours on 3 days each week. 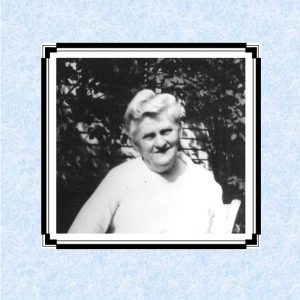 According to an article in the Ithaca Journal, March 18, 1971, the Berkshire Reading Club, formed in 1907, also played an instrumental part in the library’s formation.  Two of the most active proponents of the library were Marion Patch’s mother, Mrs. Emma Bradley Payne, and Harriet B. Johnson.  “These volunteers felt a library would enhance cultural and educational opportunities of their town.”

Mrs. Payne served as librarian, without pay, until her death in 1926.   At that time, Mrs. Payne’s house was conveyed to the Library, the front 3 rooms to be used for the library, with an apartment for her successor, Winifred Smith. 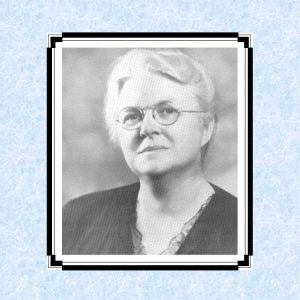 In her report, February 1927, Mrs. Patch writes:  “The year 1926, in the library history of Our Town has been most noteworthy, and in many ways marks the beginning of a new chapter in its history.

The first and possibly the most important event in the connection was the appropriation by the town board of the sum of $250.00.  This yearly appropriation will be of the greatest assistance for it will take care of the sum which must be duplicated from Albany and in great measure the salary of librarian, – fully for the first year or two and nearly as we grow larger and can better afford to keep open longer hours.”

Mrs. Patch continues noting the passing of her mother, Emma Payne, whose work increased the importance of Our Library.  She notes a donation from Mrs. Moore which helped with the move to the present building and “ease of access to those who have been tired by the stairs”.   A bequest was made by Mr. Matile toward an endowment fund and several gifts of books made including from Mrs. Stagg, Arthur Rightmire, Margery Patch, and the Owego Library.

“For the coming year we hope to consumate the plan of working with the school board and so more quickly benefit a larger number,-also there is a tentative plan for placing books in Rawson Hollow and East Berkshire for a length of time, changing again, – and so more than in any other way extend the good with the library is doing.

We begin the work in the new home and at the new year with high hopes and anticipation that the spirit which has made such success in a short seven years will go on through the years growing by leaps and bounds.” 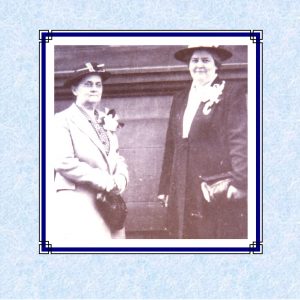 Winifred G. Smith, left,  served as Librarian from 1926 to 1953.  During her tenure, the library also served the Berkshire School, adjacent to the library.  MaryAnne Settle remembers “once a week our class would walk over to the library and each of us was to choose a book to read.”  She remembers “summers filled with books by Lois Lenski, The Strawberry Girl adventures, the Box Car Kids adventures, twins from countries around the world and sea adventures.”

Olive Marsh, right, served as one of the Trustees to file for the library’s Absolute Charter in 1926, continuing her interest in the library for many years.

On June 24, 1926, “the Regents of the University of the State of New York, being satisfied that the required conditions have been met, have granted to the Berkshire Free Library, Berkshire, Tioga County, New York, this absolute charter to replace its provisional charter, which was granted February 24, 1921, and continues the corporation with all its powers, privileges and duties.”

In 1999 a new charter would expand the library’s service area to include all the residents of the Town of Richford. 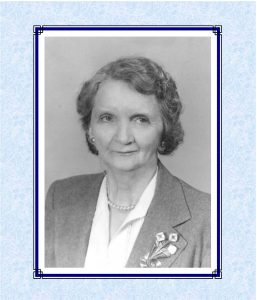 Mildred Brown, Valedictorian of the first class to graduate from the Berkshire High School in 1906,  taught ancient history, Latin, and Greek at a school in Mount Kisco, NY for many years.  She  served as a Library Trustee and became Librarian in 1953,  retiring in 1972.  Miss Brown also served as Town Historian during this time.

MaryAnne Settle continues:  “as an adult with small children the library still was an important place to visit.”  She recalls that Miss Brown would recommend reading lists each year with a variety of topics.

In 1958 the library became a charter member of the Finger Lakes Library System (FLLS) which today includes libraries in Cayuga, Cortland, Seneca, Tioga, and Tompkins Counties, providing for a greater range of resources and professional services than financially possible to an individual library. 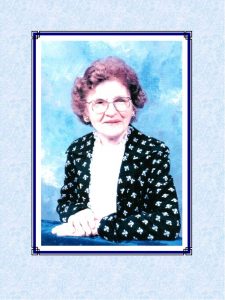 In 1972, Mrs. Edgar (Alice S.) Leonard, a former schoolteacher and library trustee, became our Librarian.  Under her quiet guidance the library continued to serve the recreational needs of adults and children alike.

In the summers were movies for the children, organized by the Berkshire Reading Club and shown in the basement (Yes, the basement!) as part of the Summer Reading Program.  Mary Cary came each year from FLLS to lead the children through the song and motions of “Going on a Lion Hunt!”. 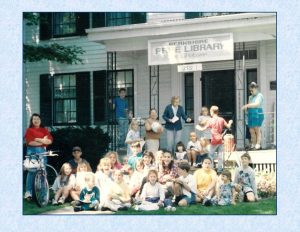 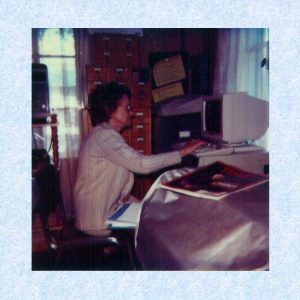 Our first step into the Computer Age came in the form of a Union Catalog of books available through the FLLS.  Not yet on the Internet, a new disk was sent periodically with the latest update of the catalog to be available on our new LePac Computer!

The Library was designated an Electronic Doorway Library by NYS in 1995, opening greater access to on-line resources for all residents and businesses. 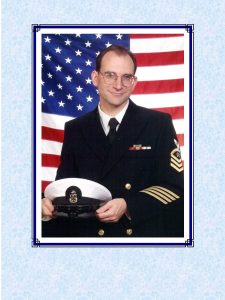 The growing technology age saw Chris Sharp (1996-2000) and Adele Baruch (2000-2001) as Directors, with Lena Sherwood beginning as our Library Assistant.

In 2000, the library was chosen by the Bill and Melinda Gates Foundation to receive 4 computers for the use of the public.  Trustee Charles Stieglitz negotiated with Haefele TV for internet service and the Community was on its way to the a new world of information.

Since 2002, the library has participated in complete on-line circulation and Inter-library loan services from FLLS, allowing access to books and other media from any library in FLLS with a library card, from home, work, or the library. 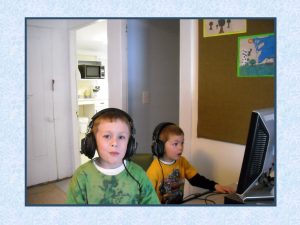 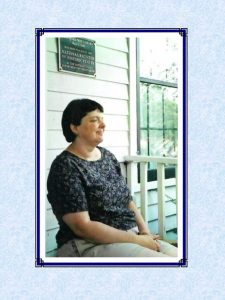 A familiar face at the library for over 20 years is Lena Sherwood.  She has served as a Trustee and as Library Assistant.  But, her love of the library began as a teen helping Miss Brown shelve books and visiting with Miss Brown and Mrs. Ella Wilkinson, who then lived in the apartment.

Lena recalls how much her own children loved the library and picking out books for her to read to them at bedtime.

Marleta Anderson (2001-2012), center below, served as Director during the major renovations to expand the library into the whole building and many service upgrades of the FLLS. 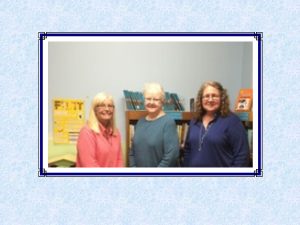 As Director, LuAnn Whirl (2012-2015), right, brought her vitality to the library and worked with Sandy Negus, Marcia Stell, and Karen McNally to begin the annual Blueberry and Book Festival, engaging the community in a fundraiser for the library and a fun time for the all ages.

Fran Miller, our current Director, puts her love into our children’s programs and making everyone welcome to the library. 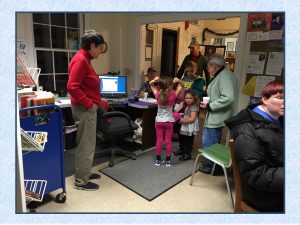 Over the years, the community has pitched in to make improvements to the library’s “home”– from building shelves and painting walls, installing new electrical and internet wiring,  to renovating and expanding the library into the whole building.  Handicapped access has been provided, sidewalks have been built and pedestrian lighting installed.

Miriam Patch’s legacy also lives on from the renovations done by Patch Bros. to donations by family members to the Patch Family Trust Fund used toward the library’s special projects. 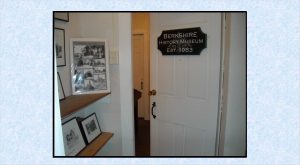 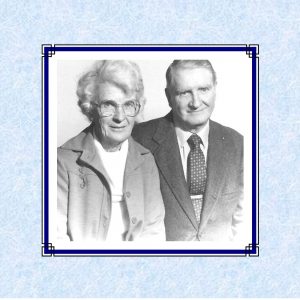 Emily, long time library trustee, was the daughter of Miriam Patch and granddaughter of Emma Payne our first Librarian.  John, Town Historian, authored a history of Berkshire.  He and Emily obtained display cases and other furnishings for the museum which were brought in through a second floor window with the help of lift equipment from Howland Brothers! 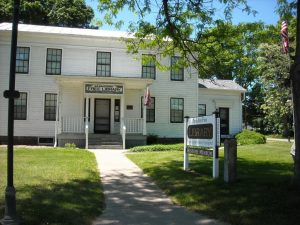 It is no surprise that in a 2014 town-wide survey conducted by the Town of Berkshire, the Berkshire Free Library came in at the top of the list for satisfaction with services and communications!

Over the years, local organizations, businesses, and countless individuals have given support to the library, its programs, and fundraising activities.  The Berkshire Fire Department, Auxiliary, and Fire Police; the Richford Town Hall; and the Berkshire Community Association have lent their buildings and services for our programs, many area churches have helped with the summer programs and fundraisers.

The Berkshire Free Library is truly an intrinsic part of our community!