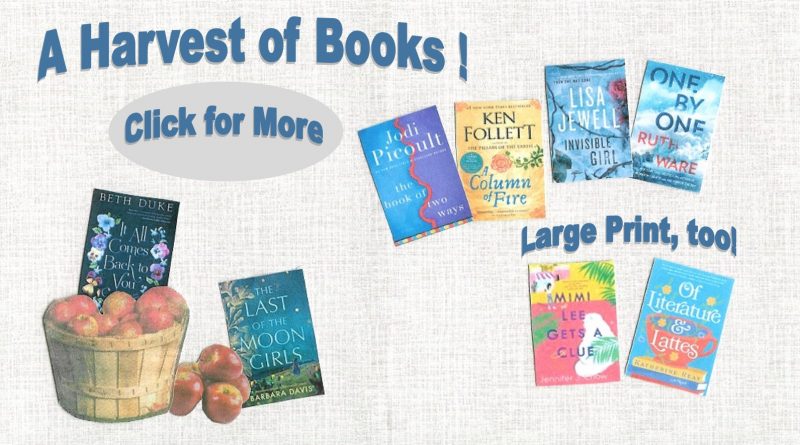 Jodi Picoult:  The Book of Two Ways: A Novel

“After my son Kyle Ferriera van Leer declared his major in Egyptology at Yale in 2010, he mentioned the Book of Two Ways in passing. Without knowing a thing about it, I said, “That’s a great title for a novel.” It was only after he began to explain what it actually was that I realized what I needed to write about – the construct of time, and love, and life, and death”-

Ken Follett:  A Column of Fire

“International bestselling author Ken Follett has enthralled millions of readers with The Pillars of the Earth and World Without End, two stories of the Middle Ages set in the fictional city of Kingsbridge. The saga now continues with Follett’s magnificent new epic, A Column of Fire. In 1558, the ancient stones of Kingsbridge Cathedral look down on a city torn apart by religious conflict. As power in England shifts precariously between Catholics and Protestants, royalty and commoners clash, testing friendship, loyalty, and love.”

Ruth Ware:  One by One

“When journalist Suzanne Randolph hears about FDR’s plan to bring a boatload of displaced WWII refugees to America, she knows it may be her last chance to redeem her flagging career. Suzanne follows the story to Oswego, New York, where she meets Theo Bridgewater, a Quaker dairy farmer from Wisconsin who has come to reunite with his uncle and aunt and cousin. Theo’s fight to spare his relatives the return to Germany becomes Suzanne’s fight as she does everything that the “power of the pen” can muster to help win public sympathy for the cause.”

Beth Duke:  It All Comes Back to You

“Veronica “Ronni” Johnson, licensed practical nurse and aspiring writer, meets the captivating Violet in the assisted living facility where Violet requires no assistance, just lots of male attention. When she dies, she leaves Ronni a very generous bequest … only if Ronni completes a book about her life within one year. …Alternating chapters between Homecoming Queen Violet in 1947 and can’t-quite-find-her-crown Ronni in the present, IT ALL COMES BACK TO YOU is Southern Fiction at its hilarious, warm, sad, outrageous, uplifting, and stunning best”-

Barbara Davis:  The Last of the Moon Girls

“Lizzy Moon never wanted Moon Girl Farm. Eight years ago, she left the land that nine generations of gifted healers had tended, determined to distance herself from the whispers about her family’s strange legacy. But when her beloved grandmother Althea dies, Lizzy must return and face the tragedy still hanging over the farm’s withered lavender fields: the unsolved murders of two young girls, and the cruel accusations that followed Althea to her grave. Lizzy wants nothing more than to sell the farm and return to her life in New York, until she discovers a journal Althea left for her – a Book of Remembrances meant to help Lizzy embrace her own special gifts.”

“Mimi Lee is in over her head. There’s her new Los Angeles pet grooming shop to run, her matchmaking mother to thwart, her talking cat Marshmallow to tend to – oh, and the murder of a local breeder to solve … now if only Mimi hadn’t landed herself on top of the suspect list.”

The Misadventures of Nero Wolfe:  Parodies and Pastiches Featuring the Great Detective of West 35th Street;                      edited by Josh Pachter

“Two dozen literary tributes to one of crime fiction’s best-loved private detectives and his Man Friday. Included are a 1947 pastiche by award-winning crime writer Thomas Narcejac; rollicking new stories written especially for this collection by Michael Bracken and Robert Lopresti; stories by bestselling authors including Lawrence Block and Loren D. Estleman; chapters from Robert Goldsborough’s authorized continuation of the Wolfe series, Marion Mainwaring’s 1955 tour de force Murder in Pastiche, and John Lescroart’s Rasputin’s Revenge, which reimagines a young Wolfe as the son of Sherlock Holmes. Also featuring a reminiscence from Rex Stout’s daughter, this is a treasury of witty and suspenseful crime writing for every fan of the portly private detective”-

Katherine Reay:  Of Literature and Lattes

“After fleeing her hometown three years earlier, Alyssa Harrison never planned to return. Then the Silicon Valley start-up she worked for collapsed and turned her world upside down. She is broke, under FBI investigation, and without a place to go. Having exhausted every option, she comes home to Winsome, Illinois, to regroup then move on as quickly as possible. … .Jeremy Mitchell moved from Seattle to Winsome to be near his daughter and to open the coffee shop he’s been dreaming of for years. Problem is, the business is bleeding money – and he’s not quite sure why.”

Lindsay Harrel:  The Joy of Falling

“It has been fifteen months since Eva and Angela lost their thrill-seeking husbands in a scuba diving accident. Both women are trying to navigate their way through the grief, but neither one is making much progress. Angela is barely making ends meet, angry at her husband for leaving her to raise three children on her own. Meanwhile, Eva is stuck, unable to move forward after losing the love of her life and her source of inspiration. But then Eva gets a life-changing phone call. Before Brent and Wes died, they had signed up for a race of a lifetime-an ultra-marathon in beautiful New Zealand.  Eva begs Angela to run the race with her in their husbands’ place…”

Mario Escobar:  Children of the Stars; a novel

“August 1942. Jacob and Moses Stein, two young Jewish brothers, are staying with their aunt in Paris amid the Nazi occupation. The boys’ parents, well-known German playwrights, have left the brothers in their aunt’s care until they can find safe harbor for their family. But before the Steins can reunite, a great and terrifying roundup occurs. The French gendarmes, under Nazi order, arrest the boys and take them to the Vélodrome d’Hiver–a massive, bleak structure in Paris where thousands of France’s Jews are being forcibly detained. Jacob and Moses know they must flee in order to survive, but they only have a set of letters sent from the south of France to guide them to their parents. Danger lurks around every corner as the boys, with nothing but each other, trek across the occupied country. Along their remarkable journey, they meet strangers and brave souls who put themselves at risk to protect the children–some of whom pay the ultimate price for helping these young refugees of war.”

“London, 1855. A young and eager Charles Lenox faces his toughest case yet: a murder without a single clue. Slumped in a third-class car at Paddington Station is the body of a handsome young gentleman. He has no luggage, empty pockets, and no sign of identification on his person. And putting together the clues to the mystery of the man’s identity only raises more questions, when Lenox discovers that the crime has a significant connection to America.”