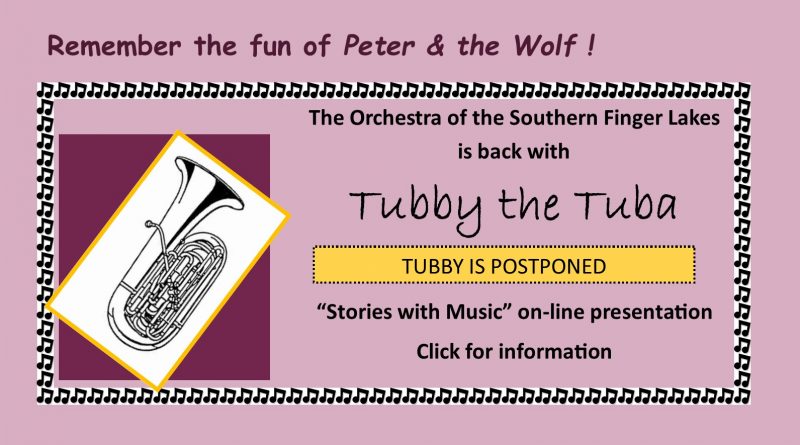 Did you have fun last year with Peter and the Wolf?  Sign up now to enjoy this free, on-line presentation.

Tubby the Tuba, performed by member of the Orchestra of the Southern Finger Lakes (OSFL), will be aired on Thursday, December 17, at 10:15 am on a secured link through the Library.

The OSFL’s “Stories with Music” programs have traditionally been held in person at local libraries during the summer.  Appropriate for all ages, this year, the program goes online with registration and access through your local library.  Sign up at https://bit.ly/BerkshireFreeShow or contact Fran at (607) 657-4418.

“Stories with Music” brings the OSFL musicians to local communities to promote music and literacy together through educational concerts with storybook themes.  Viewers will be introduced to the orchestra instruments with demonstrations and a few concert pieces.  This year’s storybook theme, “Tubby the Tuba”, composed by George Kleinsinger, is narrated by Paul Tripp.  This version was arranged by OSFL’s principal Tuba, Dave Unland, who performs as “Tubby”.  The 45 minute performance will be followed by time for questions and answers with the musicians.

The program hosted by the Berkshire Free Library, a member of the Finger Lakes Library System, is sponsored in part by the Floyd “Vic” Hooker Youth Fund at the Community Foundation for the Twin Tiers, Upstate Coalition for a Fairgame Arts Grant, and Decentralization funds from the New York State Council on the Arts with the support of Governor Andrew M. Cuomo and the New York State Legislature and administered by The Arts Council of the Southern Finger Lakes.

About the Orchestra of the Southern Fingers Lakes:

Due to the pandemic shutdown of large gatherings, the OSFL remains off-stage until further notice.  In a normal year, the OSFL offers four regular season full orchestra concerts, including a side by side Youth Orchestra and professional musician collaboration, a Musician’s Choice Chamber Music Series, concerts by the Chorus of the Southern Finger Lakes, several concerts  by the Youth Orchestra and Junior String Ensemble, as well as smaller ensemble concerts for children.  Under the guidance of distinguished  Music Director and Conductor, Toshiyuki Shimada, the OSFL is a strong supporter of highlighting the musical achievements of young musicians with its own Youth Orchestra and Junior String Ensemble programs, as well as the Hertzog Concerto Competition for young artists in grades 9-12.  The OSFL collaborates with regional cultural partners, artists, and like-minded organizations to advance our mutual artistic growth in the greater Elmira-Corning area.