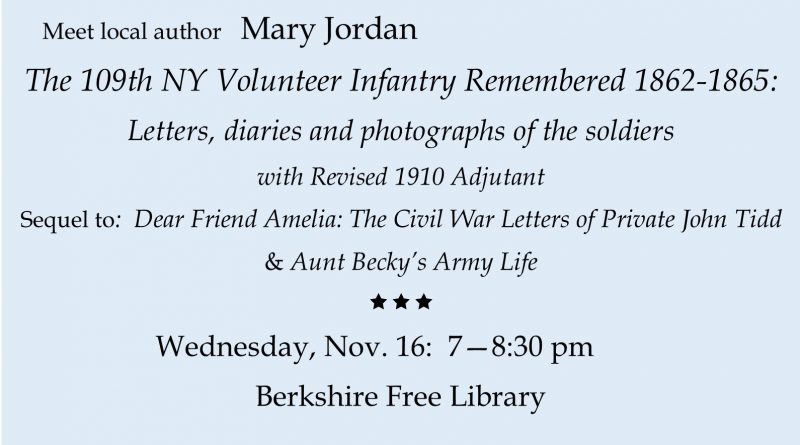 On July 22, 1862, Col. Benjamin F. Tracy, a prominent lawyer with offices in Owego, NY, received authority to recruit a regiment in the counties of Broome, Tioga, and Tompkins. Organized at Binghamton, NY in August 1862, the new regiment, named the 109th New York Volunteer Infantry, mustered into the service of the United States for three years.

The accounts of camp life, forced marches and the many battles fought by this regiment can best be told through the common soldier’s own words.  This book contains letters and diaries of 54 of the soldiers serving in the 109th, typed in chronological order and are transcribed verbatim allowing the readers to follow in the footsteps of the common soldiers, from their enlistment to the end of the war and return to their homes in June of 1865.  The book includes 110 photos of the men as well as brief genealogical data on many of the 1373 soldiers of the revised 109th Adjutant.

Mary Jordan and her sister, Joyce Hatch, also researched and wrote the award winning Dear Friend Amelia: The Civil War Letters of Private John Tidd based on letters from Tidd to Amelia Haskell of the Speedsville area on the Tompkins/Tioga County border.  This award winning book also been produced as a play for area audiences.

“Aunt Becky’s Army Life”, edited by Jordan, portrays the life of Sarah Palmer, an army nurse who cared for many of the soldiers throughout the war.

You are invited to meet Mary Jordan and learn of the research involved in these stories of area Civil War soldiers and their families Wednesday evening, November 16: 7 to 8:30 at the library, 12519 State Route 38 at the corner of Jewett Hill Rd. in Berkshire, NY.

Books will be available for purchase.